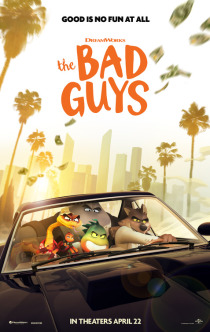 What happens when a wolf, a snake, a shark, a piranha and a tarantula walk into a bar --- er, I mean a bank? Everyone runs for their lives because they know “the bad guys” have arrived. Based on the best-selling Scholastic book series by Aaron Blabey, THE BAD GUYS action/comedy from DreamWorks Animation is truly fun for the entire family.

The screenplay by Etan Cohen is definitely great for kids. The young boys sitting in front of us at our screening really enjoyed it --- not a peep out of them throughout the entire 100 minutes. And there is plenty of humor for the adults who have to accompany them.

No new ground is broken here, but the lesson of accepting animals/people for who they are --- and not demonizing them --- always bears repeating. The five members of the gang are: Mr. Wolf (voiced by Sam Rockwell), a pickpocket and one very cool dude, Mr. Snake (voiced by Marc Maron), the expert safecracker who is hugely pessimistic, Mr. Piranha (voiced by Anthony Ramos), the “muscle” of the group with a fabulous singing voice, Mr. Shark (voiced by Craig Robinson), a master of disguise and all-around nice guy and Ms. Tarantula, a.k.a. “Webs” (voiced by Awkwafina), the fastest hacker on the planet --- gotta be with all those appendages.

These hopeless criminals are coerced by Governor Diane Foxington (voiced by Zazie Beetz) into an experimental program with Professor Marmalade (voiced by Richard Ayoade), a smarty pants guinea pig, who wants to make them the “good guys”. The effort to change them starts off well, until the truth behind the entire plan is revealed.

Directed by Pierre Perifel, making his feature directorial debut, THE BAD GUYS is an homage to Los Angeles, using the Freeway 10 area neighborhoods as inspiration. The many car chases zip along this highway through downtown LA and capture the buildings lining that part of the freeway with adept accuracy. Also, the bank at the beginning of the movie looks remarkably like the massive --- and beautiful --- Chase Bank at the corner of Vine and Sunset.

Composer Daniel Pemberton’s score is quite impressive. Requiring more than 4000 separate recording takes and 70 musicians in a single session, it had me dancing in my seat much to David’s annoyance. All of this adds up to an enjoyable animated movie experience.

A wolf, a snake, a shark, a piranha and a tarantula make up a group of criminals known as “the bad guys”. They are vilified by the normal, human citizenry because they stop at nothing to commit bold thefts and no one can stop them. They also show no remorse for their actions. Of course, the fact they are animals in a human world is a stretch, but this quintet and the new animated film THE BAD GUY from DreamWorks is based on the best-selling books by Aaron Blabey.

The most obvious conclusion to be drawn from this funny and clever achievement is the fact that it will appeal more to adults than to youngsters, despite its PG rating. Much of the movie takes place in Los Angeles, although --- full disclosure --- I personally missed most of the landmarks and traditional LA locales because I was focused on the rapid-fire dialogue and detailed animation. So, on that basis it is worth another look.

Another distinction with THE BAD GUYS is that the actors frequently performed their voiceover work together as if acting on a live set opposite their cast counterparts. This is most unusual for an animated picture. The result is more natural tete-a-tetes like the one we are treated to in the opening sequence in a diner where Mr. Fox (Sam Rockwell) and Mr. Snake (Marc Maron) are chatting. This  turned out to be the longest one-shot in DreamWorks Animation history at two minutes 25 seconds.

Academy Award winner Rockwell is superb as the slick, with-it leader of the group, his three-piece white suit, fedora and sunglasses emphasizing his coolness. But as the story progresses, Mr. Fox has a brief moment of doing a good deed for an elderly woman. Hilariously, his long tail starts to wag --- he truly enjoys being good! He tries to convince his criminal friends this is a good thing --- with obvious comic results.

THE BAD GUYS features other excellent voice performers, including Anthony Ramos (IN THE HEIGHTS) as Mr. Piranha, Craig Robinson as Mr. Shark and the unmistakable voice of Awkwafina as Ms. Tarantula, the clique’s only female. She is also the brains of the organization in her role as the hacker expert and techno wizard. In one scene, Mr. Shark dons a sequined dress to hide his real identity and the naïve humans buy it.

Alex Borstein (“The Marvelous Mrs. Maisel”) is the frustrated Police Chief desperate to catch the bad guys and put them behind bars. Perhaps the movie’s surprise asset is the voice performance by Zazie Beetz as Governor Diane Foxington --- she has her own secret as we later learn.

The inventive screenplay by a trio of writers has plenty of adult humor to keep older moviegoers entertained. Although much of the dialogue will be way over the heads of younger viewers, there is enough material on their level to keep them occupied, including the fact that Mr. Piranha lets out gas whenever he is nervous.

Director Pierre Perifel joined DreamWorks in 2007 as an animator on a variety of projects, but he wanted to try his hand at directing. THE BAD GUYS is his feature length debut and it should prove to be a hit.