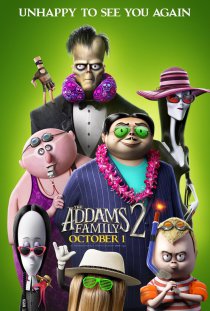 Much to my surprise, THE ADDAMS FAMILY 2 is not the drudge I was anticipating. It’s actually quite amusing and incorporates a rather meaningful message about love and families. A sequel to THE ADDAMS FAMILY from 2019, most of the voices remain the same, except for Javon Walton who replaces Finn Wolfhard as Pugsley Addams.

Morticia (voiced by Charlize Theron) and Gomez Addams (voiced by Oscar Isaac) are distraught because Wednesday (voiced by Chloë Grace Moretz) no longer wishes to be a part of their family. She has been skipping family dinners and wants no part of her father’s hugs.

Her class project for the science fair at her school has caught the attention of Cyrus Strange (voiced by Bill Hader), who sends his attorney, Mr. Mustela (voiced by Wallace Shawn) to the Addams’ home to inform Gomez and Morticia that Wednesday is really his daughter --- somehow switched at birth.

To combat Wednesday’s apathy, Gomez and Morticia round up Wednesday, Pugsley, Uncle Fester (voiced by Nick Kroll) and Lurch (voiced by Conrad Vernon) in their haunted camper for a long road trip across the United States in an effort to regain their family unity. They leave Grandmama Addams (voiced by Bette Midler) to safeguard their home, but she has other --- bigger --- possibilities in mind.

While I cannot write that THE ADDAMS FAMILY 2 is a laugh riot, it does have a few laugh-out-loud moments. One in particular features Lurch taking over a piano in a biker bar and belting out --- in a falsetto no less --- “I Will Survive”, the Gloria Gaynor hit from 1978.

There are the usual hijinks between Wednesday and Pugsley --- with Wednesday winning the competition --- and other such nonsense. But I am convinced children will find this sequel funny enough, with jokes thrown in here and there for parents.

Snoop Dog reprises his role as Cousin It, with a wild --- and hairy --- performance at the conclusion of THE ADDAMS FAMILY 2. While it may not suit everyone’s tastes, it does handle Wednesday’s familial dilemma in a satisfying and enlightened way. All in all, it will make a good diversion for the entire family --- and, of course, THE ADDAMS FAMILY 2 does include the snappy Vic Mizzy theme song from the 1960s sitcom.

Opening in theaters and available for online rental

The Addams family saga from 2019 has a sequel. A quartet of directors/co-directors has brought back much of the cast to voice the familiar characters in the new film THE ADDAMS FAMILY 2.

Leading the way again are Oscar Isaac as Gomez Addams, albeit with a voice I could not distinguish as belonging to Mr. Isaac, and Charlize Theron who voices Morticia, his slinky brunette wife. Chloë Grace Moretz has a dominant role voicing their daughter Wednesday Addams.

Other notables in the cast include Bill Hader as the requisite evil scientist Cyrus Strange, Wallace Shawn as his attorney Mr. Mustela and Bette Midler returning as Grandmama, plus Snoop Dog is back as Cousin It. Nick Kroll again voices the hapless Uncle Fester and Conrad Vernon (he co-directed the 2019 version) voices --- more accurately grunts his way through --- as Lurch. Javon 'Wanna' Walton is the new voice of Wednesday’s little brother Pugsley.

Probably the singular highlight of THE ADDAMS FAMILY 2 is Lurch playing the piano and singing the disco era hit “I Will Survive” in a biker bar while the burly patrons dance in unison. A running joke about a boyfriend trying to propose to his future wife gets a lot of play. And the music by brothers Jeff and Mychael Danna is sensational. Older sibling Mychael won an Oscar for the great LIFE of PI (2012).

THE ADDAMS FAMILY 2 has something for the whole family and kids will love it. It’s a clever and ambitious animated effort. Even Flo from the Progressive Insurance ads makes an appearance of sorts --- she’s on a billboard.

Opening in theaters and available for online rental