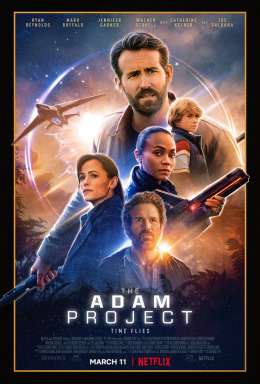 Reuniting after the success of their collaboration on the movie FREE GUY, director Shawn Levy and star Ryan Reynolds --- who also produces --- chose a screenplay by Jonathan Tropper, THE ADAM PROJECT. A sci-fi film rooted in time travel, their new adventure focuses heavily on father/son relationships.

It is 2022 and 12-year-old Adam Reed (Walker Scobell) has a few issues. His father, Louis Reed (Mark Ruffalo), a noted scientist, was recently killed in a car accident, his mother, Ellie Reed (Jennifer Garner), has started dating, plus she works, so she is preoccupied, and the bullies at his school pick on him constantly.

On one of his nights home alone, crashing noises in his wooded backyard send Adam out to investigate. He finds a wounded pilot from the year 2050, who just happens to be his 40-year-old self (Reynolds).

The two Adams team up to find Adam’s wife, Laura (Zoe Saldana), who is trapped in the year 2018. Mucking up the works is Maya Sorian (Catherine Keener), the CEO of a massive tech business sporting her name, who is attempting to commandeer Louis’ time travel invention --- and not for the common good.

David, my illustrious writing partner, will grouse that THE ADAM PROJECT is lame and forgettable. What he doesn’t get is that this movie may not fully entertain him, but it will most certainly delight the majority of 12-year-old boys --- and others who enjoy a little light amusement.

Reynolds maintains his running schtick as adult Adam, which fits right in with Scobell’s adorable young Adam. These two have quite an on-screen presence --- and chemistry --- which cannot be denied. They each get in their own licks with clever one-liners, with Scobell not taking a back seat to Reynolds.

It's lovely to see Garner and Ruffalo reunited, too, after all these years since 13 GOING ON THIRTY (2004). Garner is a pro at playing a regular mom --- perhaps because she is one --- and she has quite an emotional scene in a bar with Reynolds, whom she doesn’t recognize as her grown up Adam.

Ruffalo does an exemplary job playing a father with a few regrets about not spending enough time with his son. There’s a superb moment with just the three of them --- Louis, Adam and Adam --- playing catch that illustrates the point of THE ADAM PROJECT. It’s not about spaceships, cool special effects and time travel --- it’s the love and relationships that are important.

Granted, THE ADAM PROJECT is not as good as it could have been. Considering Tropper had assistance with this script from Mark Levin, Jennifer Flackett and TS Nowlin, you would think four writers could have penned a more cohesive --- and funnier --- screenplay. But it’s not all bad, despite whatever David thinks.

THE ADAM PROJECT is a sci-fi time traveler movie that just didn’t work for me. The premise of a 40-year-old man (Ryan Reynolds) who travels back in time and meets his younger 12-year-old self (Walker Scobell) is not a theme I found compelling. I much prefer earlier movies with more of an emotional impact that feature characters moving from one era to another who want to change history, influence the future, or perhaps simply find love. Films like SOMEWHERE IN TIME or THE LAKE HOUSE come to mind.

Directed by Shawn Levy, THE ADAM PROJECT boasts a great cast with Reynolds, Mark Ruffalo and Jennifer Garner. To be fair, some scenes --- like the one with adult Adam (Reynolds) advising his mother Ellie (Garner) on her relationship with young Adam (Scobell) --- are noteworthy.

One aspect of a good story, of course, is how we feel about the characters. In THE ADAM PROJECT I was not particularly moved by the key relationships presented, including the main one between the two Adams. Young Adam spouts things that seem far beyond his years and is not believable. Adult Adam is married to Laura (Zoe Saldana) but there is little in the way of a back story to empathize with their situation. Even the attempts of the Adams to relate to their father, Louis (Ruffalo), I did not find especially poignant.

Catherine Keener plays the main villainess, Maya Sorian, and she has an army of soldiers under her thumb. The problem here is the overuse of special effects amid the battles between the Adams and the soldiers who always are instantly destroyed, primarily by contact from the light saber weapon wielded by adult Adam. The repetition of the soldiers’ demise makes the intended visual effect commonplace rather than unique.

Reynolds is given some humorous lines and he delivers them in typical Ryan Reynolds fashion though it’s not enough to recommend this film. But Reynolds is at his best when his character puts the fear of God in a grade-school bully who has tortured young Adam for years --- the best scene in THE ADAM PROJECT.