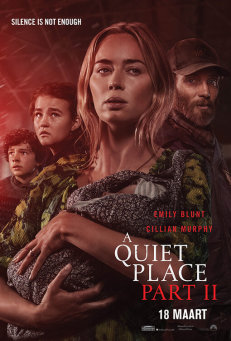 Full disclosure --- I did not see the original A QUIET PLACE. I am not a fan of horror films, but after over a year of not seeing screenings in a real theater, it was thrilling to be back, and I could not pass up the opportunity. And, as I have often stated, you should critique a film based on its own merits.

A QUIET PLACE PART II begins with a flashback anyway. John Krasinski, who also directs again, starts off the movie as Lee Abbott, on his way to his son Marcus’ (Noah Jupe) baseball game. His wife, Evelyn (Emily Blunt), is already there with their daughter, Regan (Millicent Simmonds), who is deaf.

As Marcus is up at bat, another father, Emmett (Cillian Murphy), has a radio which begins to go haywire, and a big ball of fire suddenly streams through the sky. As people try to make their way home, the alien creatures appear, creating chaos and death.

Fast forward 474 days: Lee is dead along with their other son, Beau, so Evelyn, Regan, Marcus and baby Abbott are forced to leave their home in search of others --- and food. As they make their way, as quietly as possible since these creatures are blind but have acute hearing, along abandoned railroad tracks, they encounter Emmett, who survives alone in a ramshackle railway station.

When Marcus and Regan hit upon a recording of “Beyond the Sea” by Bobby Darin on their radio, Regan takes it as a sign that there are people out there living on an island off the coast from where they are. She convinces her mother that she must try to find a boat, and Evelyn then begs Emmett to go after her. Meanwhile, Evelyn leaves Marcus behind with the baby so she can return to their small town in search of medical supplies.

In all honesty, I am no longer thrilled by horror films. Any unexpected frights are unwelcome by me, and there are plenty in A QUIET PLACE PART II. The creatures themselves are scary enough with their long, gangly appendages and big ugly heads filled with enormous cuspids.

Add to all that the other dangers encountered by Evelyn and her brood, namely Marcus getting his leg caught in a trap for one, and A QUIET PLACE PART II has enough suspense to keep you on the edge of your seat for 97 minutes. I so appreciate the fact that A QUIET PLACE PART II doesn’t overstay its welcome.

Krasinski wrote the screenplay based on characters developed by Bryan Woods and Scott Beck. Because of the need for silence, there isn’t a lot of dialogue, but I loved the usage of American Sign Language. Simmonds is deaf in real life and worked with a coach to make sure her signing was as clear and precise as possible. What an awesome responsibility for someone of her age. And Krasinski’s script is fairly devoid of any major blunders.

It is because of Blunt, Simmons and Jupe that I found A QUIET PLACE PART II so intriguing and believable. Blunt is exquisite in a role such as this due to her expressive countenance and her motherly instincts. She’s such a joy to watch, even though she’s in such a harrowing situation. Simmonds and Jupe are amazing young actors, with Jupe having had two major outstanding performances in FORD V FERRARI and HONEY BOY from 2019.

So, I can truthfully report that despite the fact that I didn’t see A QUIET PLACE, A QUIET PLACE PART II is highly entertaining --- even though for me it was almost too scary. And the ending is perfectly set up for PART III, of course. It will be interesting to see where Krasinski and Blunt take this series next.

The opening sequences of A QUIET PLACE PART II serve as a reminder to some and an introduction to others who may have missed the first film about how this creepiness all started. Actually, the movie’s first half hour is more startling than the rest of the story because what starts out as a normal day in Americana --- families rooting for their sons in a baseball game --- evolves into an eerie nightmare of total chaos.

I especially like writer/director John Krasinski’s attention to detail, e.g., the towel in place to prevent the steel hatch from locking Evelyn Abbott (Emily Blunt) and her kids inside their secret hiding place. And he only uses the cheap gimmick of a sudden loud noise once, by my count, as opposed to other thrillers which tend to abuse such tactics.

I found Millicent Simmonds’ performance as Regan, Evelyn and Lee’s (Krasinski) deaf daughter, particularly engaging. And if the young actor playing her brother Marcus, who gets his foot caught in an animal trap early on, looks familiar, his name is Noah Jupe. The 16-year-old had a major role in last year’s blockbuster TV mini-series “The Undoing” opposite Nicole Kidman and Hugh Grant. In the absence of her husband Lee, Evelyn turns to Emmett (Cillian Murphy), a man who appears to be only out to protect himself during the crisis. The handsome Murphy maintains our rapt attention as he becomes somewhat of a savior. And then, of course, there’s the baby!

I will say the timing of A QUIET PLACE PART II couldn’t be more relevant given the latest to-do about UFOs in the news. All this is a bit ironic since this sequel was due to be released last year at the same time Covid-19 entered into everyone’s reality. I recall PART II being among the first entertainment victims of the pandemic, no one really sure if/when it would be released other than for a short time in New York City. It was a smart move to hold off until theaters were ready to admit attendees again, as this genre needs to be seen on the big screen.

Two-time Oscar nominee Marco Beltrami provides the especially unsettling music and Polly Morgan’s cinematography is crucial to the suspenseful settings. Of course, without the visual effects crew and their heinous creatures, A QUIET PLACE PART II would be distinctly boring. Speaking of that, the creatures here make the alien monsters in Sigourney Weaver’s ALIEN series tame by comparison, though that was over 40 years ago and special effects have obviously evolved.

If horror movie demons make you uncomfortable you might want to take a pass on A QUIET PLACE PART II. Otherwise, definitely leave the young ones at home. The film has a PG-13 rating, which means it’s way too scary for small children. I must say I am surprised that Jeanne --- not exactly a horror movie fan --- managed to last through our entire screening with hardly a whimper. What a trooper!